Find out if you're eligible Calculate your savings 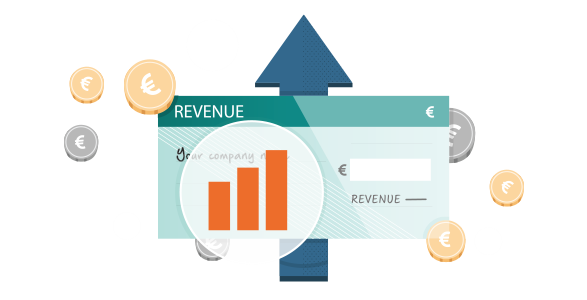 Below we've created 6 simple sections to help you understand how R&D tax credits work and whether your business could make a claim.

What are R&D Tax Credits?
The claims process
Is your business eligible?
Calculate your potential R&D claim
How Myriad Associates can help you
Our R&D tax credit portal
FAQs

What are R&D Tax Credits?

The R&D Tax Credit incentive is designed to encourage innovation and increase spending on R&D activities for companies operating in the Ireland.

It’s one of the Irish government’s top incentives for encouraging investment in research and development. The credit is calculated at 25% of qualifying expenditure and is used to reduce a company's Corporation Tax (CT).

Many businesses don’t realise that they qualify for R&D Tax Credits or that they are not claiming their full entitlement. In 2018, the Irish government supported businesses with €475m in R&D tax credit funding. 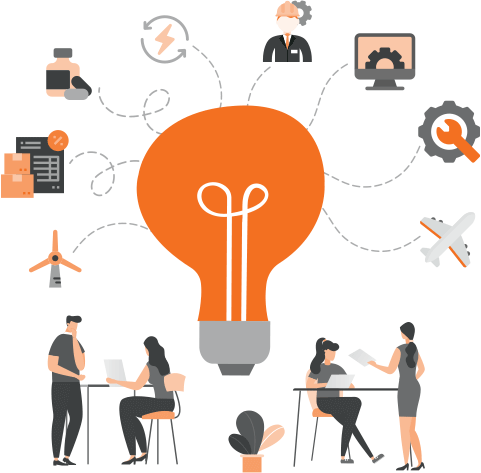 Who is eligible for R&D Tax Credits?

Any company in any industry may be eligible for R&D Tax Credits.

Any Irish company in any industry may be eligible for R&D Tax Credits. The key is that the company must be undertaking development activities that seek to achieve an advancement in science or technology.

Although it is not a legal obligation, we recommend that an R&D tax claim report is produced that justifies the technical advancement and uncertainties as well as details the eligible expenditure that is being claimed on a project by project basis.

In order to maximise your R&D claim, we recommend speaking with an R&D tax specialist to ensure you're not leaving money on the table.

In the past, Myriad Associates have tripled the claim value for businesses who’ve previously completed their claims in house. 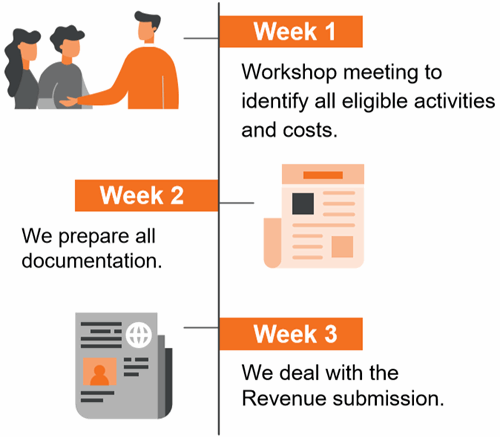 "Myriad is professional, helpful, knowledgeable and friendly. I would definitely recommend Myriad to anyone who thinks they might have an R&D claim. It's great value for money. So it's a no-brainer for me really."

Is my business eligible for R&D Tax Credits?

If your company is taking a risk by innovating, improving, or developing a process, product, or service, then it will likely qualify for R&D tax credits.

A good test to determine if the work undertaken qualifies as R&D, is whether your project team faced uncertain outcomes at the start of the project.

That means that your team did not know from the outset whether a particular outcome was achievable.

If you can show that your project goes beyond simply applying existing technologies, then you may be eligible to make a claim.

Could you make claim?

Speak to our specialist team today and we can help you to decide whether your business meets the relevant criteria and whether any credits can be applied for the R&D projects you’ve undertaken.

Find out if you’re eligible

Our R&D tax credits calculator will provide you with an estimate of the corporation tax savings or cash payment that you may receive from Revenue following a claim for R&D tax relief.

How we can help

By profiting from our specialist R&D tax credit knowledge and experience, you can be sure of securing & maximising your R&D tax claim. Typically, Myriad Associates submit R&D tax credit claims that deliver up to 3 x more value than in-house prepared claims or those filed by generalist accountants. 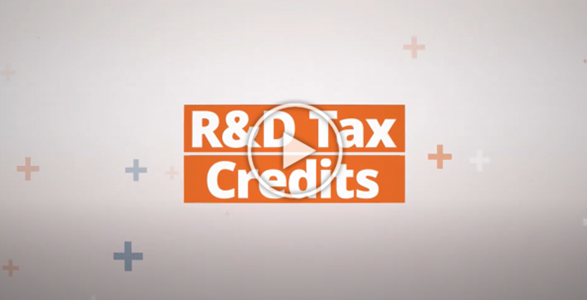 Tax Cloud is our online R&D tax credit portal and was the first of its kind in the Ireland.

Ideal for small & medium-sized businesses who require guidance making a robust and maximised R&D claim but do not require full consultancy. 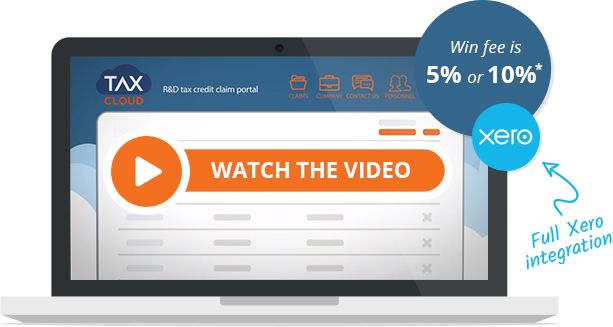 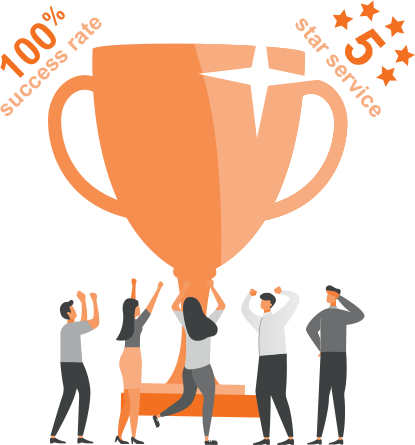 The current R&D tax credit rate is calculated at 25% of qualifying expenditure and is used to reduce a company's Corporation Tax (CT) and the good news is that R&D Tax Credits for SMEs was increased to 30% for accounting period starting on or after the 1st January 2020.  Where a company has insufficient Corporation Tax against which to claim the R&D tax credit in a given accounting period, the tax credit may be credited against the Corporation Tax for the preceding period, may be carried forward indefinitely or, if the company is a member of a group, allocated to other group members.

Where a company has offset the credit against the Corporation Tax of the current and preceding accounting periods and an excess amount still remains, the company may make a claim to have the amount of that excess paid to it by Revenue in three instalments over a period of 33 months: -

Many businesses don’t realise that they are undertaking eligible qualifying activities. It is not uncommon for their accountants to forget to tell them about R&D tax credits or even to tell them that they don’t qualify. If your technical lead (the R&D manager, lead engineer, or lead developer) is struggling to overcome the technical challenges of your project – if they are scratching their head wondering how to proceed, or losing sleep worrying about the technical uncertainties they face – your project will almost certainly qualify for R&D tax credits. More details can be found in our blog: What Kind Of Irish Companies Can Apply For R&D Tax Credits?

In terms of qualifying tasks, the following activities would be considered eligible for R&D tax credits:

In addition, certain indirect support activities may qualify for R&D tax credits, such as:

You can claim relief of 25% (for medium/large companies) or 30% (for small/micro companies) on qualifying expenses. The main areas of cost that can be claimed are:

It is not uncommon for an R&D team to consist of many individuals from different parts of the business. Your R&D project team may include the R&D Manager, a Lead Developer, Engineers, Project Co-ordinators, CAD Engineers, Quality Control and Testing specialists, and Cost Accountants, as well as members of the senior management team.

A business must submit its R&D tax credits claim within 12 months of the end of the accounting period during which the R&D activities took place. To make a claim, the business will need to complete the CT1 form through the Revenue Online System. More details can be found in our blog: How Far Back Can I Claim R&D Tax Credits In Ireland?

Revenue will not allow a late claim based on not having sufficient time or not being aware of the R&D tax credits scheme.

When Revenue receives a claim, it follows one of two processes:

We strongly advise that a claim for R&D tax credit is supported by a detailed report which outlines the technical advancement and uncertainties as well as providing a detailed breakdown of the eligible R&D costs.

Section 766 (qualifying activities) of the CT1 return must be completed within 12 months of the end of the accounting period in which the business incurred the R&D expenditure.

In either case, the company must incur at least the same level of expenditure on qualifying activities which it carried out itself, and the subcontracted activity must qualify as R&D in its own right. The Company must notify the subcontracted party in writing that they may not make an R&D tax credit claim for these activities.

Any expenditure which is met directly or indirectly by any grant aid or assistance from the state, or any public or local authority of any other agency of the state or of another relevant EU or EEA member state will not qualify for R&D tax credits

This means that if your company has received a relatively small grant, your company could lose money overall, as the grant can significantly reduce what your company can claim in tax relief. This is why you should always seek professional advice when making an R&D tax credit claim.

Common examples of software development projects that may qualify for R&D tax credits include:

Common examples of product and process development projects that may qualify for R&D tax relief include:

A Revenue intervention of an R&D claim consists of two tests:

Revenue has a panel of experts which it consults as required when completing the science test.

More details can be found in our blog: What is the Revenue's "Science Test" for R&D tax credit?

Revenue can audit any R&D tax claim made up to four years from the end of the claim's accounting period. Revenue will often ask claimants to provide information about the basis of the claim and may carry out more formal desk and field audits. A claim that is overstated or does not meet the requirements of the R&D tax credit scheme must either be repaid in part or in full, with interest, and Revenue may also raise a penalty.

Companies making an R&D tax credit claim must maintain contemporaneous and relevant records of the expenditure incurred in carrying out the R&D activities. The quality and quantity of the records kept can affect the outcome of an audit. For this reason, many companies choose to work with an R&D consultant as they are able to handle any enquiries from Revenue on your behalf.

Does your business qualify?

Speak to our experts today to see if your activities qualify.

What best describes you?

We would like to help you decide whether your business meets the relevant criteria and whether any credits can be applied for the R&D projects you’ve undertaken. Please click on the button below to speak with an expert.

We would like to help answer any questions you have regarding the R&D tax credits scheme. Please click on the button below to speak with an expert and one of our specialist team will get in touch.

We would like to help answer any questions you have. Please click on the button below to speak with an expert and one of our specialist team will get in touch.

Speak to an expert Back